4. Kaisari, S., Sitry-Shevah, D., Miniowitz-Shemtov, S. and Hershko A. (2016) Intermediates in the assembly of mitoic checkpoint complexes and their
role in the regulation of the anaphase-promoting complex. Proc. Natl. Acad. Sci. USA 113, 966-971.

The cell division cycle is driven by oscillations in the levels of regulatory proteins such as cyclins, inhibitors of cyclin-dependent protein kinases and
inhibitors of anaphase initiation. The programmed degradation of various cell cycle regulatory proteins is carried out by the ubiquitin system.
This system, which was discovered in my laboratory, targets proteins for degradation by ligation to ubiquitin. The timely ligation to ubiquitin of such
regulatory proteins is carried out by specific ubiquitin-protein ligases. Of these, I am focusing recently on the mode of action and regulation of the
Anaphase-Promoting Complex/Cyclosome (APC/C), a multi-subunit ubiquitin ligase complex that is essential for exit from mitosis and for preventing
premature transition from G1 to S phase of the cell cycle. APC/C is also the target of the mitotic checkpoint (or spindle assembly checkpoint) system,
a surveillance mechanism that ensures the fidelity of chromosome segregation in mitosis by delaying anaphase initiation until all chromosomes are correctly
attached to the mitotic spindle. When the mitotic checkpoint is active, it generates inhibitors of APC/C that prevent its action to target for degradation
anaphase inhibitors such as securin and cyclin B. An important inhibitor of APC/C is the Mitotic Checkpoint Complex (MCC), which assembles when the
checkpoint is turned on and disassembles when the checkpoint signal is extinguished. We are studying the molecular mechanisms of the assembly and
disassembly of MCC and of other mitotic checkpoint complexes. We are also investigating how different mitotic checkpoint complexes inhibit the action
of the APC/C ubiquitin ligase. Since many cancer cells are characterized by aneuploidy, caused by defects in chromosome segregation, the results of this
investigation may have implication in cancer. 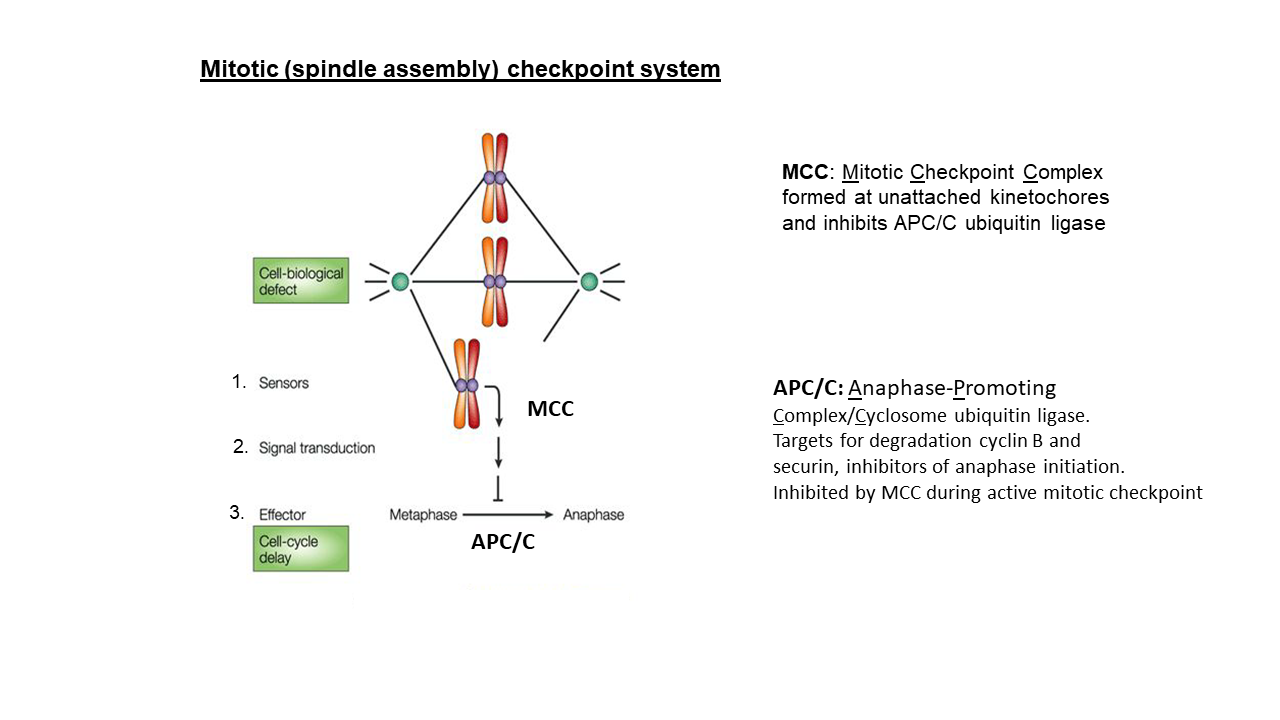