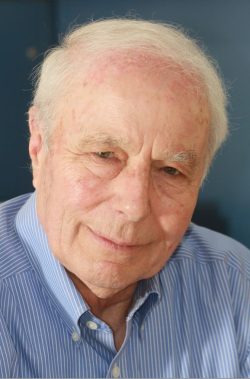 Prof. Avram Hershko
Avram Hershko is a Distinguished Professor at the Department of Biochemistry of the Rappaport Faculty of Medicine of the Technion. He was born in 1937 in Hungary and emigrated with his family to Israel in 1950. He gained his MD (1965) and PhD (1969) from the Hebrew University- Hadassah Medical School of Jerusalem, a period which included service as a physician in the Israel Defence Forces (1965-67). After a post-doctoral fellowship with Gordon Tomkins at the University of San Francisco (1969-72), he joined the faculty of the Technion becoming Professor in 1980 and Distinguished Professor at 2000. His main research interests concern the mechanisms which cellular proteins are degraded, a formerly neglected field of study. Hershko and his colleagues showed that cellular proteins are degraded by a highly selective proteolytic system. This system tags proteins for destruction by linkage a protein called ubiquitin, which had previously been identified in many tissues, as the name suggests, but whose function was previously unknown. Subsequent work in Hershko’s and many other laboratories has shown that the ubiquitin system has a vital role in controlling a wide range of cellular processes, such as the regulation of cell division, signal transduction and DNA repair. Abnormalities in the ubiquitin system result in diseases such as certain types of cancer. The full range of functions of the ubiquitin system in health and disease has still to be elucidated. Hershko was awarded the Nobel Prize in Chemistry (2004) jointly with his former PhD student Aaron Ciechanover and their colleague Irwin Rose. His many honors include the Israel Prize for Biochemistry (1994), the Gairdner Award (1999), the Lasker Prize for Basic Medical Research (2000), the Wolf Prize for Medicine (2001) and the Louisa Gross Horwitz Award (2001). Hershko is a member of the Israel Academy of Sciences (2000) and a Foreign Associate of the US Academy of Sciences (2003). He currently investigates the control of cell division by the ubiquitin system, a topic important for cancer research.